Where to live in London, everything you need to know!

Searchable by London Borough, Postcode or Area, this section is a veritable encylopaedia of information – we have detailed statistics on average rent and purchase prices of various sized properties, population demographics and crime statistics! Click here to see more!

Postcodes, Boroughs and Areas of London – an explanation

The geography of London can be split by Postcode, Borough, or Area. Our London statistical information, such as crime, population and house price figures are presented by postcode, however we have compiled all of the data so that you may also view the information by Borough or Area.

A postcode links an address to a specific mailing area, and were introduced for the purposes of sorting mail. Within the UK a postcode generally takes the format of XY11 1ZZ. The first two letters, signify the area/city of the location (e.g. Leicester is LE), with the numbers focusing the address to a more specific region. The subsequent letters and numbers ‘zoom-in’ to a residential location.

A full postcode not only indicates the street of the residence, but also indicates the location with respect to which side of the road, and even whether the address in on the top/middle/bottom of the street (for longer roads).

Due to higher density areas, some postcode districts have been split to create new, smaller postcode areas. This has been done by adding a letter after the original postcode districts (e.g. W1P). The postcodes that also may have letters after the initial letter/number combination includes: EC1-4, WC1-2, E1, W1 and SW1.

Each postcode area, e.g. N1, can measure from 1-10km2 depending on the population density. Giving the first letter/number code of your postcode can be a useful way of letting someone pinpoint where you live, but only if they know the area!

To further confuse matters London is also divided into what are called Boroughs. A London Borough is basically a form of local government, raising local taxes and administering local services. So London postcodes divide London on a geographical basis for postal sorting while London Boroughs divide London by boundaries between local authorities (boroughs).

A Borough often encompasses many postcode areas, for example, the Borough of Hackney includes some postcodes within E8, E5, E10, E15, E2, N1, N16, N15... As previously mentioned, Boroughs are administrative boundaries, however postcodes are purely for mail sorting purposes.

Greater London is divided into 32 Boroughs, 12 within Inner London, and the remaining 20 within Outer London.

Each London borough is a Local Authority, an administrative centre responsible for running most local services in their areas, such as schools, social services, waste collection and roads. Some London borough councils also group together for such services as waste collection and disposal, e.g. the West London Waste Authority. Each Local Authority also represents a local Education Authority and Local Government Districts (elections are held every four years).

It is important to know your Borough for concerns such as: payment of Council Tax, library information, dustbin collection, children’s schools, voter’s registration, etc.

An area of London is so named because of the major town/village in the vicinity. Often an area will not follow the patterns of postcodes or Boroughs, and there are no set boundaries. This is because people define the area themselves, often from villages or towns that have grown up within London as it has. The names of underground stations often correlate to these areas. 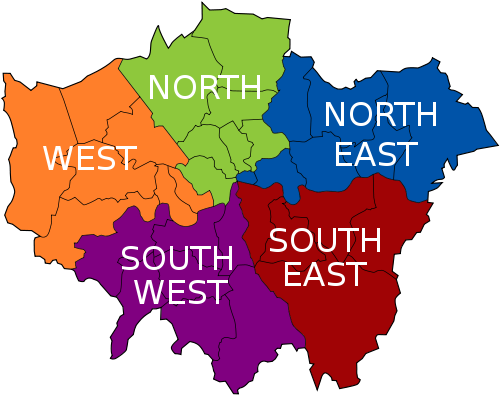 For example, someone living near Angel tube station lives in the Borough of Islington, and their postcode is N1. However, if someone were to ask them where they lived, they can just as accurately reply, ‘I live in Angel’, as Angel is the name that people often use for the main high street area around the station.

London is often described as a vast and diverse network of smaller villages. For simplicity, however, London is often separated into five major geographical areas: Central, North, South, East and West, with the North-South divide being bordered by the River Thames.

Central London encompasses the City of London, which is the financial centre of the capital. “The City”, as the area is known, has Liverpool Street Station as it’s main hub, set in the middle of towering buildings housing offices for the largest national and global banks as well as the Bank of England.

North London is well-known for Camden and Islington (birthplace of Tony Blair's New Labour). The north is quite residential and more up-scale, being the stronghold of “yummy mummies” and young professionals with families. Camden retains its bohemian and hippy image with its large market and world-famous gigs. Neighbourhoods such as Angel have recently been seeing growing interest, with property prices continuing to rise even through the credit crunch.

South London has a number of popular areas, despite housing a number of more deprived areas. This is largely to do the draw of Brixton – one of the most populated areas in London and known for the race riots that started there in the 1980s in the Thatcher years. Transport links aren’t the best, but at least the Victoria line is one of the fastest in London to make up for it.

The West End is known to be the mainstay of the rich and fashionable. Here you’ll find the main shopping precincts of Oxford Circus and Bond Street, trendy Soho with its restaurants and bars, as well as the tourist attractions of Piccadilly Circus and Covent Garden. Heading further West, you’ll see more residential areas with increasingly expensive houses, as well as having the best shops to be found in the vicinity. Such areas include Chelsea, Notting Hill and Kensington.

East London has grown out of 19th Century Industrial Era London. The area’s many converted warehouses and factories still hint at it’s history, thankfully without the sooty industrial smoke that created the famous London smog for nearly 150 years. Today East London is known as the birthplace of the Cockney accent, as well as having a large Asian population and the world-famous Bricklane in Shoreditch. East London also draws people from all walks of life, with a number of creative ambitions being realised here; a centre of fashion, art and music, Shoreditch and Hackney have become very trendy with BoHo chic and artistic aspirations seeing celebrities such as Gilbert & Georges and Tracey Emin starting out here.

With the Olympics in 2012, much work is being done to get London ready ahead of the games in Summer 2012. Large underground stations are being refurbished to allow for increased traffic (namely Tottenham Court Road), as well as a number of roadside and cycle lane construction work. Additionally, the overground Line has significantly expanded it’s network to improve flow of traffic to Stratford, where the majority of the events are being held. There has also been much regeneration work at Stratford, with many new housing developments built, as well as the brand new Westfield Stratford City – the largest shopping centre in Europe! (Stratfordcity)

You can find more information on property rental and purchase prices, as well as population demographic and crime data for each individual borough or postcode. Follow the links below for more: